This is some history of 848 Folsom St. and Amber Gean's experience of practicing the Rocket and being with Larry. It is really just skimming the surface of some sweet cream and some sweet memories. 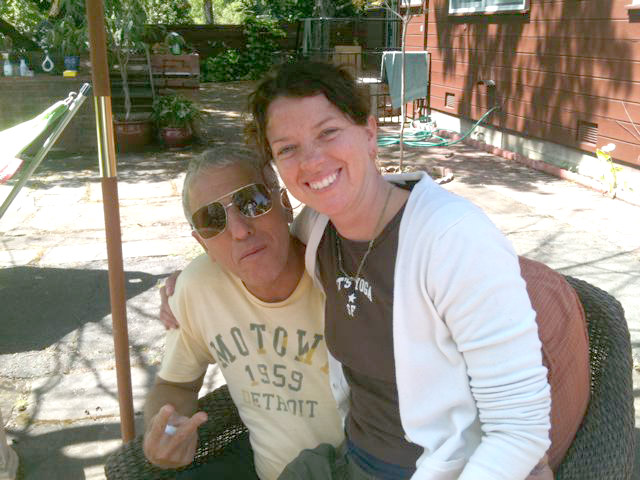 After her training in San Francisco, year 2000 under the guidance of Larry Schultz, Amber Gean found herself at It's Yoga Cincinnati assisting in one of the first yoga teacher trainings in Cincinnati if not the first. One year later she returned to see Larry in San Francisco while her partner at the time, Dion Savage was attending the famous one month intensive. While there she began sitting in the trainers circle and sharing her experience while observing Larry's training methods. At this time there began talk about a studio out of the US in Canada, Larry was in the process of opening It's Yoga Vancouver, the first It's Yoga out of the country.

Amber Gean with Dion and baby returned again to the "guru" in the year 2002 in Vancouver where the vision had manifested. They arrived for the first and only teacher training in Vancouver. Larry had an all-star cast of yogis invited up to be a part of the training, including Danny Paradise. It was a magical time for yoga "everything was happening". Larry was also visiting Cincinnati regularly to assit in trainings.

Some of the other San Francisco Trainings she recalls was one that had 25 Japanese girls traveling with an interpreter and 25 others who spoke English. A lot was happening and it all centered around yoga. People were falling in and out of love and 848 became a revolving door for self-realization with the energy that we were all able to tap into by practicing The Rocket.

In the year, 2007 things began to change. Larry slowly migrated up north to Sonoma and It's Yoga Cincinnati wanted to offer a wider range of classes and move away from the Larry Rocket Yoga System. At this time Amber Gean migrated also to open her own studio and continue leading classes and teacher training in the Rocket Vinyasa system.

Near this time was the beginning of Rocket Yoga Training. Amber came as an observer to see what was happening once again. Reed Taylor of Method Yoga was there and began leading cross training exercises. Amber Gean recalls bringing these cross training methods to her studio, Yoga ah and incorporating them in the level one yoga training.

Once Larry was settled in Sonoma and opened his retreat center Amber began traveling up there to see him. It was like Larry was a magnet for yoga and in the yoga world it's all good and it was always all good near Larry. His joy was infectious. His classes and being around him you felt inspired to be a better yogi and stronger more confident person. He could make you laugh and make you cry. Larry always brought out the real you, the only way to be around him was to be real to yourself and keeping showing up to the mat.

When Larry suddenly passed in 2011, there was an unavoidable void. Our alpha and guru had left his body. Many of his students and those that knew Larry were sad. In that sadness, he offered all his students a gift. That gift is The Rocket Yoga Practice. It is our mission at Yoga ah to continue Larry's work. To continue leading Rocket Yoga classes and to offer Yoga Training the way Larry would want us to, which is in our most authentic voice possible.

It is through all these stories and the practice that we can allow the beauty of these artful Rocket Sequences live on, in us, thru us with every breath.