Larry was an American yoga instructor. He studied traditional Ashtanga yoga with Pattabi Jois for a number of years and then began instructing in Austin TX and and after that in San Francisco.

He was one of the first yoga instructors to develop a yoga teacher training program and 100’s of yogis traveled to San Francisco every year to learn “the system” as Larry fondly called it.

Larry developed more beginner routines called the MDR or Minimum Daily Requirements and MPS or Modified Primary Series to make Ashtanga yoga suitable to the masses. Later he developed the Rocket while on tour with the Grateful Dead as there private yoga instructor. Named by Bobby Wier the sequences are known to help you progress your practice at a faster rate. Larry taught up into the time of him leaving his body in 2011. Today his most dedicated students continue his teachings. 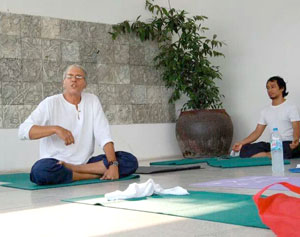